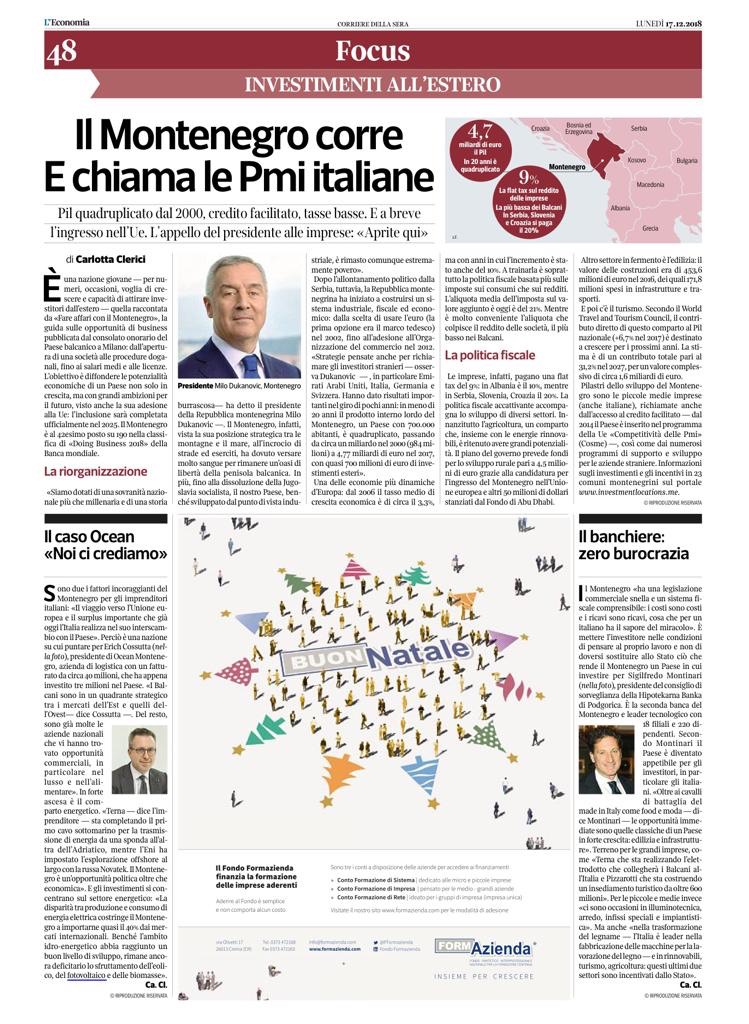 Corriere della Sera about Montenegro: One of the most dynamic economies in Europe

As the magazine states, Montenegrin GDP has quadrupled since 2000, taking out loans has become much easier, tax rates are low… And very soon, EU accession.

“Doing business with Montenegro”- a guide about the possibilities for business, published by the honorary consulate. The objective is spreading information on economic potentials of a state that is not only developing, but also has huge ambitions for the future.

“We have got a national sovereignty that’s older than one millennium and we have a turbulent history”, said Montenegrin president Milo Đukanović.

After distancing from Serbia in political context, Montenegro started building industrial, tax and economic system and it all gave great results.

Average economic growth rate amounts around 3,3%. It’s stimulated mostly by the policy based on the tax on consumption more than on the income. Average TAV rate amounts 21%.

Companies pay a unique tax rate that amounts 9%. This attractive tax policy is followed by the development of many sectors, agriculture, in particular. Government’s plan predicts funds worth 4,5 million EUR for rural development.

Value of construction sites amounted 453,6 million EUR in 2016. And there’s also tourism as well as small and medium enterprises, as the pillars of Montenegrin development.

There are two encouraging factors for Italian investors when it comes to Montenegro: its journey towards the EU and an important surplus Italy is making in the exchange with this state.

Energy sector is rising too.

Terna is finishing the first submarine cable for energy transmission from Adriatic coast to another, whereas ENI initiated research on an open sea with the Russian Novatek. Not only is Montenegro a political opportunity, but also an economic. Investments are focused on energy sector. Although, the hydro energy domain has reached a good level of development, use of the wind energy, solar energy and biomass energy still remains scarce.

Corriere della Sera about Montenegro: One of the most dynamic economies in Europe